After Thursday’s meeting John mentioned that he was going out to his new land on Friday or Saturday and that others were welcome to join him.  Pete and I couldn’t make it out on Friday so John said he would head out on Saturday so we could come along.  The price of entry, as John put it, was that we had to give our opinion about his various plans for building the cabin and observatory.  Since it looked like Saturday was going to be a nice clear night I decided I would bring my car so that we could carry more equipment.

I originally planned on just doing visual observing but in the end decided to bring the adapters to connect my DSLR just in case the bug caught me.

Pete and I met at John’s house around 4:30pm.  Tom decided to join us so we needed to stop in Lampasas to pick him up along the way.  After for stopping to pick up dinner in Goldthwaite we got out to John’s property around 6:30pm.

There is a good open field just as John’s new road ends with excellent views of the horizon.  We walked around his property discussing various options for a while.  Pete and I both felt like his observatory would be best situated uphill a bit, nestled in a loosely wooded section of the property.  There was a good area around for observing as well.  It didn’t have the best southern horizon on the property but for that kind of viewing you wouldn’t have to go far.  Because of the trees it seemed like it would be a little more sheltered from the wind as well.

After earning our entry, Pete and I dug around the various limestone outcroppings for fossils.  It’s hard to walk anywhere and not find little fossilized shells or traces of them in the rocks.  I found several larger oyster fossils and one spiral snail which John let me take home.

As sunset got a little closer I went over to start setting up my equipment.  As I wasn’t planning on doing any heavy imaging, if any at all, the setup went quickly.  I tried the polar alignment correction routing in my mount which went horribly and as I found out later actually put me further away from the pole.  I’ll have to look into that more.

As it got darker it was clear that John did a great Job finding this land.  The Moon was in first quarter so it wasn’t as dark as it could be but as the evening moved on we found that, despite the extra light, objects like Omega Centauri were visible naked eye.  Just as we packed up the summer Milky Way was rising and even low on the horizon the dark rift was clearly visible.  Very nice.  I’m guessing it would be on par with Eldorado without the Moon up.

I viewed several objects through my scope as well as Pete’s and John’s.  We all checked out the Moon and planets early on and then as it got darker started finding fainter objects.  The seeing wasn’t the best but you could still see a small amount of detail on Mars.  We looked for and found comet C/2012 K1 PANSTARRS.  I could see the nucleus and a small halo around it but could not discern any tail.  M51 showed some structure.  Tom suggested I look at the Sombrero galaxy and it was an excellent idea.  It was easily recognizable with the bright core was clearly obstructed by the dust in the disk.  Pete found several small galaxies, some globulars and open clusters which we all enjoyed.  I’m not sure what else John or Tom looked at.

After a while, the photography bug took hold and I decided to image the comet.  This was kind of tough as I had no way to attach the camera to the mount or to piggy back it on the scope.  In the end I strapped it to the mount’s dovetail using painters tape with Tom’s help.  I didn’t have my 250mm lens so I used the 18 to 55.  I first focused it on the Moon and then slewed over to where the comet should be and took some images.  After stacking it took me a while to find it as the field of view is so large (it covers most of the big dipper).  Here’s an annotated version: 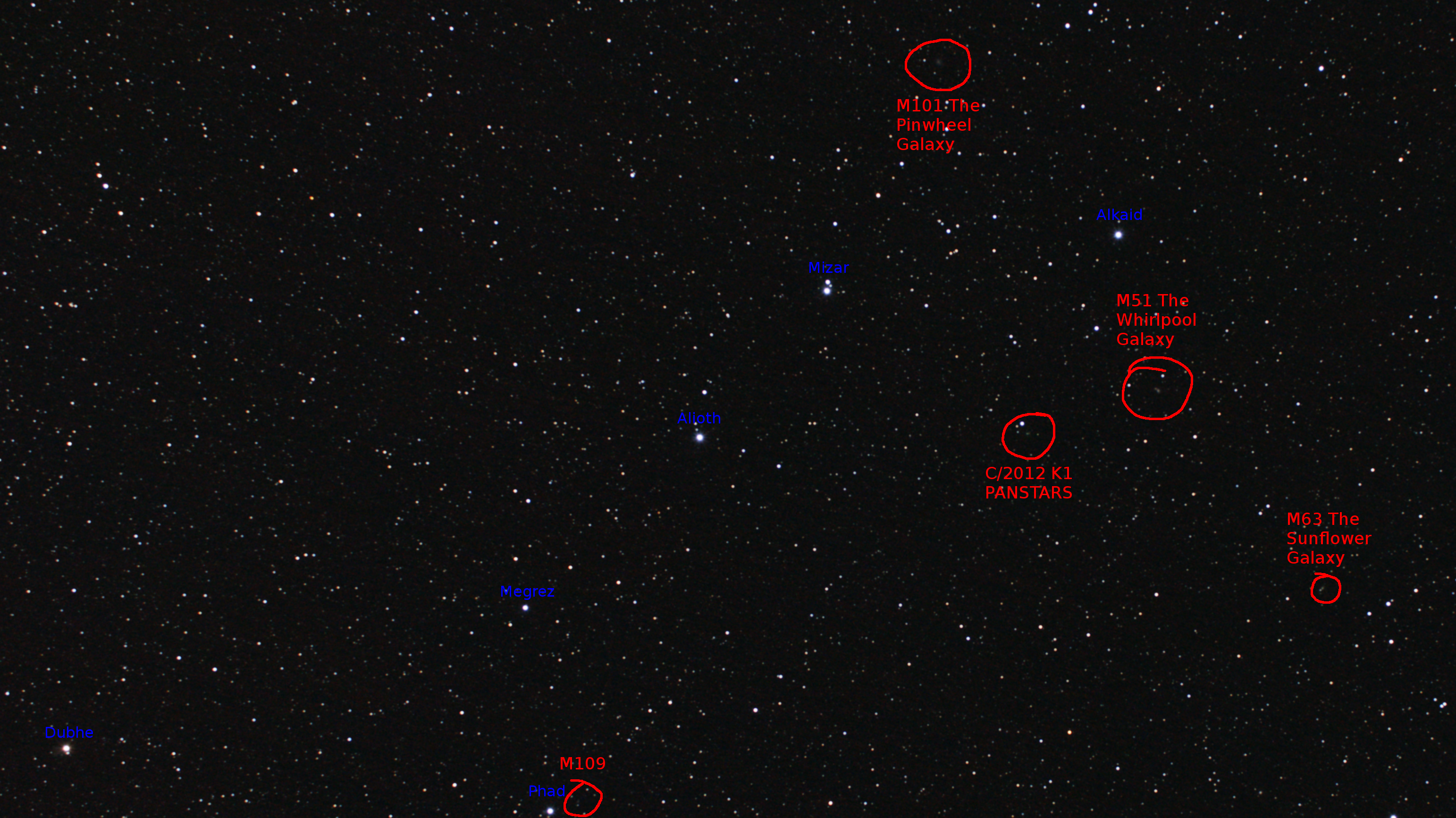 Given that Omega Centauri looked fantastic through some of our scopes I decided to give it a go photographically.  I put the scope back on the mount, attached the camera and promptly realized I forgot my USB cable.  Luckily John had one which I borrowed.  After several minutes of polar aligning the mount, which got me very closer to where I stared with just a compass and level, I got everything focused and started imaging.  Since I had no guide equipment I was limited to about 30 second exposures.  This worked out in the end since I think I would have overexposed the core with longer exposures.  Here is the result: 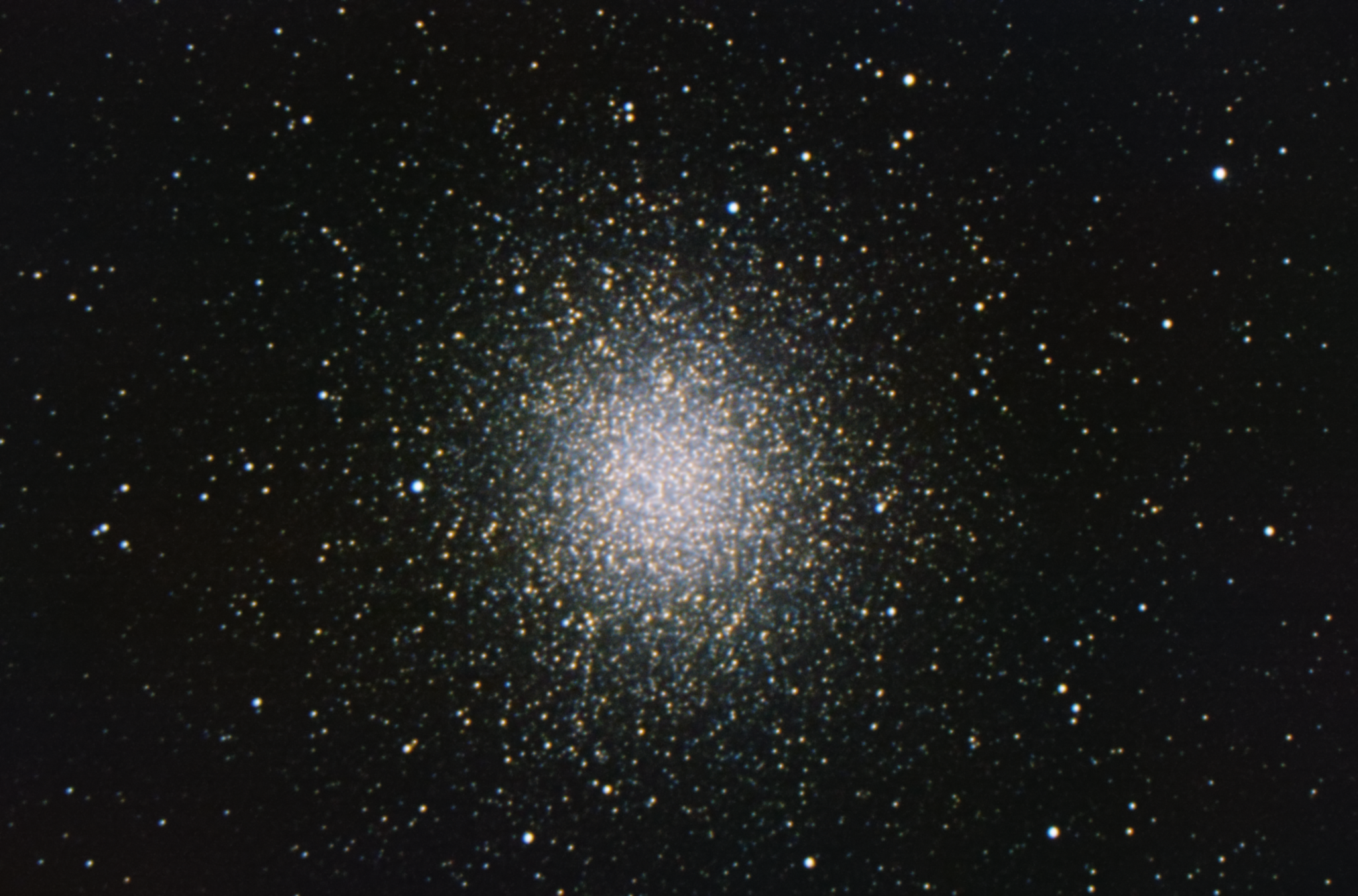 I was quite please with how this turned out especially since I had no calibration frames.

We started packing up around 12:30am and left around 1am.  On the drive back I wondered why John was driving in the left lane (I’ve always felt it put me closer to oncoming traffic which would be harder to avoid and more catastrophic if there were a collision) until I noticed that there was a huge number of deer along the side of the road.  We dropped Tom off and headed back home.  Since all of Pete’s stuff was in John’s car I decided to take my own route home.  I figured it might also allow both of us to drive with our brights on which would be a little safer with all the deer about.

I got back home a little after 2:30am and was unpacked and in bed around 3am.  It was definitely another fun night of astronomy!