John posted on the Williamson County Astronomy Club forum that Mark was going to be doing research tonight at Fountainwood Observatory and that any club members were welcome to join him out there.  Since I had work the next day I knew I couldn’t stay out too late but because we’ve had so few clear nights this year I decided to try to do some imaging.

I got out there about 6:30pm and started to setup.  There’s about a 200ft walk between the parking lot and the observation pad and it takes probably 20 minutes to shift all my heavy equipment over there.  Outside of the weather, this is probably the biggest factor in deciding if I go out on any given evening, seeing as I have to heft all that equipment around 4 times if I am setting up away from the house (into the car, onto the field, back into the car, into the house).

I took a little time out of setting up to take some pictures of the area.

The first is a more detailed shot of my setup.  You can see the container for my scope sitting off to the left waiting in the shade for the sun to set. 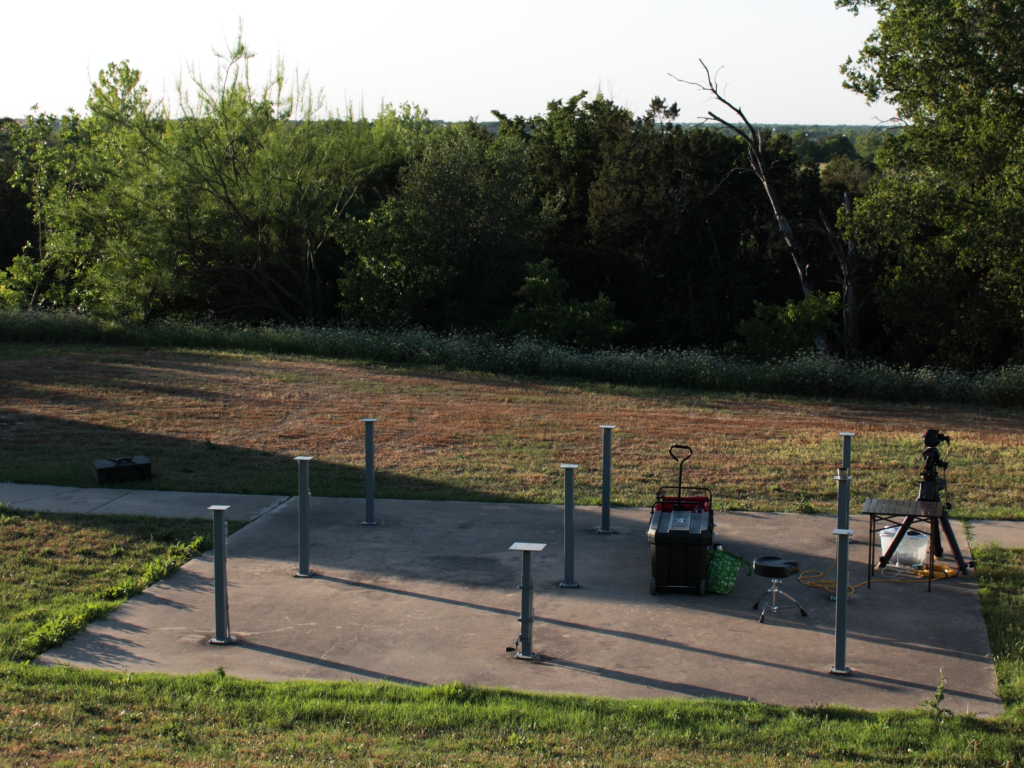 The next shot is of the whole Fountainwood observatory area.  You can see the dome to the left which houses their 16″ Schmidt-Cassegarin telescope mostly used visually for public nights.  On the right is the roll-off-roof observatory where their 16″ Ritchey-Chrétien telescope lives which is used primarily for research.

After I finished setting up my equipment I started my polar alignment and point modeling.  I did take calibration frames but unfortunately I had a cable snag on something and shift the camera orientation relative to the scope just as it got dark so those would be useless.  Luckily, I brought my flat-field device so I could take calibration frames at any time.  I decided to take them after I had completed my imaging runs.

My target for the night was M101, the Pinwheel galaxy.  I had attempted this one before with some older equipment and have been wanting to try it again for a while.  Since the astronomical seeing conditions weren’t going to be great and it is relatively large it became the target of choice.

John showed up around 9:50pm.  I had about 20 minutes of exposures completed (4 x 5 minutes) at this point and was able to show him a preview of what I was working on.  We chatted for a while as my imaging rig continued to take pictures.  I kept an eye on the focus readout as the images came back.  The focus shifts a fair amount with temperature and I could feel it getting colder quickly.

Mark arrived a little after 10pm and started opening up the research observatory.  John went in to help him and I popped in occasionally to chat when I could (a third person just gets in the way rather than helping any).  Mark is studying active galactic nuclei (AGN) which are galaxies that have super massive black holes that are actively feeding on material around them.  His observatory is part of a large network of telescopes, including Hubble, that are observing several of these objects.  It’s always interesting talking to him about the physics of these things.

The evening didn’t turn out quite as clear as I hoped.  There was some particulate matter in the air which dropped the transparency drastically.  On good nights you can see stars down to about 20 degrees out there but tonight they started to disappear near 40 degrees.  You could see a red tint to the sky as the light pollution from the surrounding cities was scattered off of the dust.  This dropped the signal to noise ratio in my images dramatically and kept me from taking longer exposures.

I also had some guiding issues where my declination axis would not respond to guide commands for a while and then would ‘jump’ dramatically.  I had to restart several images when this happened.  I’m guessing that I balanced the scope incorrectly so that the weight was pulling counter to the desired direction of the gears keeping them from staying meshed.  Normally, I would correct this but it was happening infrequently so I let it slide.

Despite the poor transparency and guiding issues I got some decent results.

I’ll have to devote some more time on M101.  It’s looking good but I think it could use some more exposure time and some color data.

My last image completed around 12:12am and I took new calibration frames.  After all the data was gathered I started packing up.  I made it back to the house and unloaded everything by a little after 1am.

Even if the imaging had turned out horrible I still would have had a great time talking with Mark and John.  All in all an enjoyable evening.