CTSP was scheduled for this Friday and since the weather was looking good I decided to take a little break from work and head out to Canyon of the Eagles.  I had started imaging NGC5614 at Southwestern a few days prior and decided to continue on that target.  The darker skies at CoE should certainly would allow me to increase my exposure time and up my signal to noise ratio a bit.  I also thought I would try to do some solar photography with my PST so I left around 2pm.

Because I stopped for gas, water, snacks and dinner on the way out I didn’t arrive until almost 4pm (it normally takes about an hour and 10 minutes).  Still, since sunset wasn’t until 8pm I had plenty of time to setup and try some solar imaging.

When I got there another AAS member was already on the field.  We talked briefly and then I starting pulling out equipment.  After doing a minimal setup, I quickly found that my DSLR would not come to focus with the PST even using a barlow, so I switched to my CCD camera.  I had to decouple it from my normal imaging train (filter wheel, OAG, adapters) and thread on an old 1.25″ nose piece adapter.  Even though the CCD sensor is only 12mm from the T-threads I could still not achieve very good focus.  All the images I got were blurry and there was a clear gradient indicating that the CCD was tilted or off center.

I switched to using an eyepiece and saw a couple prominences and spots.  None of them were very large but it was still enjoyable to see.

After my solar viewing I put the PST away and started setting up my regular equipment.  The sun was still quite high and I because I’ve had problems with the focus shifting quickly after dark when the scope is warm from direct sunlight I decided to wait to put the OTA on the mount until after the shadow from my car covered it.  I went ahead and connected all the electronics and started the camera cooling.

During this time several others arrived and I talked to some of them off and on.  James showed up a little later and he setup his big 12″ Dob right next to my spot so we could chat.  I have to say, for $700 it is a lot of scope.

I got a few pictures of people setting up on the field but as usual once I get busy with my own setup and talking to people I loose track of trying to capture more.  I estimate there were 20 to 30 people on the field that evening but I only caught the ones that were there by around 6pm.

A little before sunset the shadows were steep enough to cover my mount and telescope so I worked on completing my setup and getting as many things ready as I could before nightfall.  I noticed some clouds building up in the west but they never seemed to reach above 15 degrees or so.

At 8pm I started taking calibration frames and by 8:30 it was dark enough to start drift aligning.  I found there must have been something throwing off my compass because I was over 5 degrees from the pole in azimuth.  It took around 30 minutes to get below an arc-minute.  By 9pm I was done and started building the pointing model for my mount (this tells the computer in the mount how to translate the coordinates for objects in its database to locations in the sky).  After this I calibrated the autoguider and then re-focused and got ready to start imaging.  Before taking my first exposure I took a test shot to calculate how long my light exposures should be.  I decided to go with 15 minutes, which for luminance is quite long.  I started the sequence around 9:25pm.

I had to refocus quite frequently throughout the evening which I think is related to mirror shift more than just temperature change.  Still, because I had 15 minutes between images I had plenty of time to walk around, talk to people and see what they were observing or doing.

Probably the most interesting thing that happened all night was the ISS passing overhead.  James had the idea of trying to catch it in his scope and I was amazed he was able to do it.  I gave it a shot too and was amazed that it wasn’t too difficult to keep in the eyepiece.  It was exceptionally bright, but despite the glare you could actually make out the solar panel arrays, which I think surprised all of us.

Later on I tried to help Jim with his new planetary camera.  Not being familiar with Orion’s capture program I couldn’t help to much on the acquisition side but I was able to walk him through the use of Registax for stacking planetary images from video files.

Darin showed James and myself a great view of Mars through his 16″ Dob.  It’s probably the best I’ve ever seen it.  You could clearly make out a polar ice cap, some of the dark surface markings and some bright haze around some of the edges which we suspected were clouds.  We also looked at the Eskimo nebula of which you could clearly see some of the structure.

Through James’ scope we saw Saturn, Mars, Jupiter, M13 and M3.  All of them looked excellent.  At higher magnifications the planets zip through the eyepiece very quickly making it difficult to see specific details but I was still very impressed with the views through that scope.

The wind progressively increased through out the night causing my tracking to go nuts.  Eventually, I had to pull the dew shield off my scope.  That thing works as a sail and removing made a drastic improvement in my tracking accuracy.  However, around 12:30 it started to get very humid so I decided to call it a night and start shutting things down.  My last image came in around 1am and I started packing up.

Once everything was in the car I said my goodbyes to everyone still awake on the field and tried to drive off without disturbing anyone.  I got home a little after 2:30 and by 3:00am was in bed and falling asleep.

I combined the data I got from Southwestern with the data from CTSP and was pleased with the results.  I think I’m going to need about 4 times as much exposure time to get the result I am looking for though (I currently have 4.7 hours).  Here’s the work-in-progress image, hope you like it: 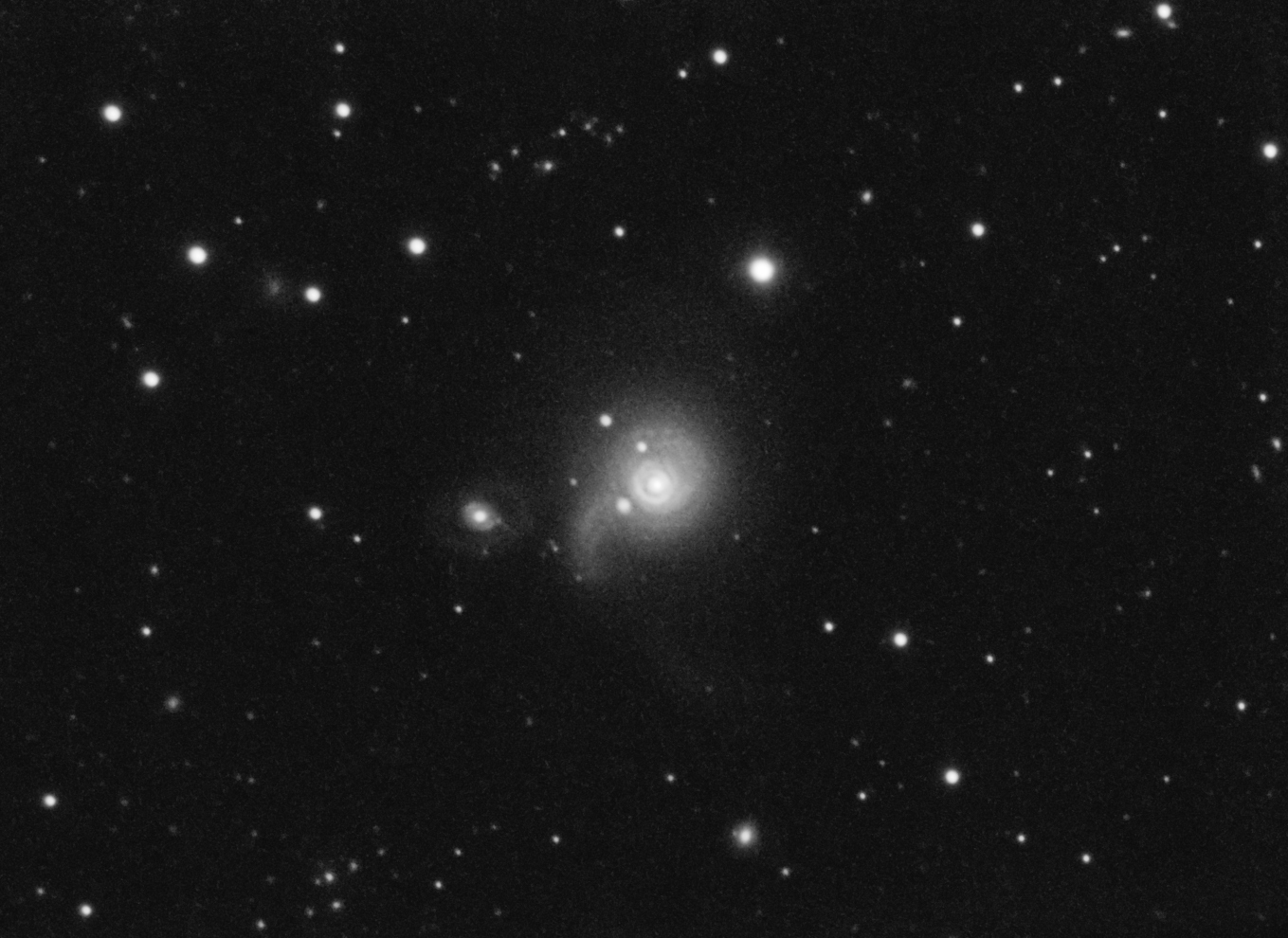 All in all it was an excellent night with good company.